Challenge has been a unique teacher in my life. The challenges I’ve encountered have taught me many lessons. After my father died when I was nine years old, for example, I lived with my grandmother and continued my education by selling bananas in front of her house. Later, I moved to Taunggyi, Shan State, to continue my education with my aunt’s support.

During my time as a student, I could not pay the tuition for extra classes like many of my friends, but I was still one of the girls who got the highest marks in class. That changed my aunt’s perspective to let me continue my studies. Unfortunately, her husband died, and after that she told me to follow my mother who was staying on the Thai-Burma border. I understood that she could not support me anymore, so I left Burma.

I continued grade ten in a refugee camp at Bible Way School. It was difficult to communicate with the other students, who were from different ethnic groups. I had never known their language or culture before. At school, every subject was taught in the Karen language. Because I was different, I was discriminated against. The experience encouraged me to learn their language, and eventually I was able to at least understand and speak Karen.

After studying computers and English in grades eleven and twelve, I planned to go to university. But my mother wanted me to support the family, so I joined Shoklo Malaria Research Unit Clinic. I kept concentrating on my education, though, and I did self-study after I had finished my work duties. After working for over a year, I asked my mother to allow me to return to school. She agreed immediately, and in 2012 I sat for the entrance exam for the Minmahaw Post-10 program. As a student at Minmahaw, I became the student vice president.

What Others Are Saying About Chit Chit

Chit Chit is a determined young lady on a mission to succeed in all endeavors she takes on. She is determined to return to Myanmar to help her country and community progress.

In 2013, I tried to get into Minmahaw Education Foundation (MHEP), which is very competitive. Just 24 students are chosen from among over 300 youths. After two attempts, I became a student at MHEP. The students at MHEP not only study but also do community service in the neighborhoods near the school. Through community service, I learned that a lot of Myanmar children living around the Mae Sot dump do not go to school but instead collect plastic bottles to sell to factories that reuse them. I felt that this was related to the political and economic problems inside my country. I felt a responsibility to take action for those in need and decided to become a successful entrepreneur to help financially needy people.

In 2014, I took the GED exam. Although I passed the exam, I did not get a scholarship from either Child’s Dream or Prospect Burma. So I left for Danyela Learning Centre, a migrant school in Bangkok, as a volunteer teacher with 500 baht (less than US $15) in hand. While working at Danyela, I applied to the University of the Thai Chamber of Commerce (UTCC).

Fortunately, I was accepted and earned a 50% tuition scholarship (gold scholar) from UTCC. The rest was supported by my former teacher from Minmahaw. When I arrived in Bangkok, I stayed with my elder sister who was a scholarship student at Rangsit University. Last year, however, she graduated and returned to Myanmar. I had to start living alone. I could not afford to rent a room, so I asked for help from many people. Luckily, a former teacher helped me for several months. Because I am not the only one he supports, I do not wish to add to his burden.

I am now a third-year student, majoring in International Business Management. I was named an “International College Ambassador,” which gives me opportunities to practice leadership and give presentations as a Myanmar student.

Along the way to becoming an entrepreneur, not having an adequate amount of support for rent and daily spending is a hardship. I tried my best to overcome this situation, but it did not work out. If I have a chance to overcome this challenge, my full potential of hardworking spirit and willingness to work will be restored. 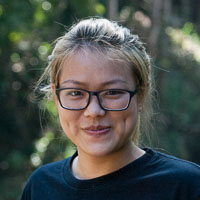 “After my father died when I was nine years old […] I lived with my grandmother and continued my education by selling bananas in front of her house. ”

Being on stage for a dance competition

To have talent in math

The owner of a successful company

If I am granted a Zomia loan, … my actions for becoming successful will be more effective and less time consuming.

On the 2017 Zomia student outing