On June 1, 2017, Leakhena’s loan was fully funded on the Zomia website. Lorraine, from Seattle, joined 13 other lenders to finish funding Leakhena’s $1,425 loan. Thank you! 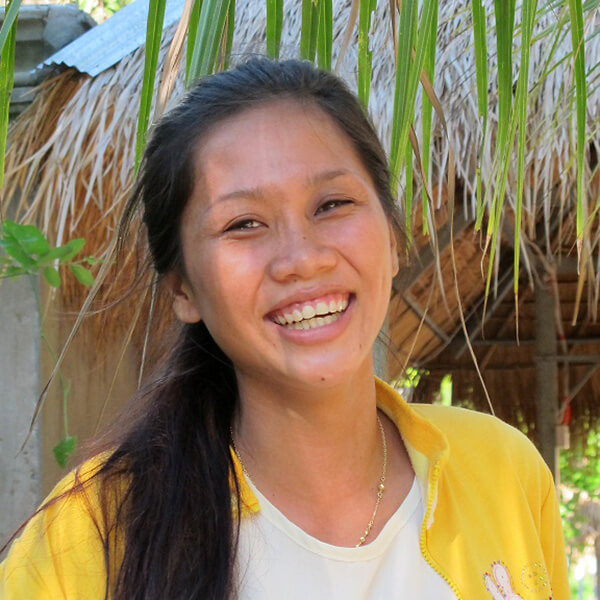 I was born in 1996 in Prey Veng province. Both my parents are farmers. I am the middle child and have one older sister and one younger brother. My sister studied until eighth grade but is now married with a son and works in a factory. My younger brother is in fourth grade studying at the same school I did growing up.

As a kid I always helped my family on the farm. I transplanted rice, watched the animals, cooked and helped around the house. I entered high school in 2010. The closest high school was 10 kilometers away, so I had to move closer. My difficulty was that my parents needed to spend a lot of money to support me—school materials, bicycle, and especially money to study and for food. So I lived and worked with an aunt whose house is near the school.

I would help her in the mornings and evenings selling goods at the market. I lasted half a year at her house before I came running back home.

But in 11th grade flooding washed out the road from my house and cut the electricity. My mom told me it was already too difficult commuting from the house to school. She asked me not to make it more difficult and just go back to my aunt’s home to study. These difficulties did not stop me though. I told myself I would study for my parents and family because I would not stop until I had work and could support myself and my family.

In addition to my studies and helping my family on the farm, I always joined work that contributed to the community. I volunteered with CEDAC one summer, an NGO that works with rural farmers. I interviewed and translated for farmers in many villages for a wells impact survey.

Leakhena, in her own words

First I thought that in the future I wanted to be a good programmer. But now I think I want to be a banker. Then if I have a lot of money I want to use my money to do business.

I also helped translate for foreign dentists who came to a pagoda near my school. And once I joined a short course called “Girls Leading Our World” (Camp GLOW).

When I was studying I never knew what I wanted to do. People would ask me and I would say I wanted to become a teacher. My relatives, however, wanted me to study medicine because we didn’t have anyone in our family with a background in medicine. But after high school I decided to take the teacher examination. Unfortunately I failed, so my early dream to become a teacher did not come true.

In early 2014 I made the decision to study at a university in Phnom Penh. After studying for a while, I noticed some of my friends were studying Japanese. I thought that was interesting. If I could learn Japanese I thought I could work with Japanese because there are many who come to Cambodia. They open businesses and maybe I could work with them or help translate.

At first I thought I wanted to become a good programmer but now I think I want to be banker. If I have money then I can use my own money to open a business. I would open a big restaurant and make it attractive for Cambodians and foreigners. I would also use my money to give my parents a better life. I want to see them happy.

Written by Leakhena with editing assistance from Zomia’s volunteer editors.

Ride in an airplane

Whenever we go to the fields to plant rice, we take a break to eat lunch. That meal is the most delicious.

What is the most important quality in a friend?

If you could go back in time, what year or period would you travel to? Why?

What was your favorite class last semester? Why was it great?

Accounting because I had a good teacher

I need a loan from Zomia because my family are farmers who do not have many resources for my studies. A loan from Zomia supports me for my studies, rent, food, clothes, and many things my parents don’t have money for. With this loan I can finish my bachelor’s and could continue to get my master’s degree.