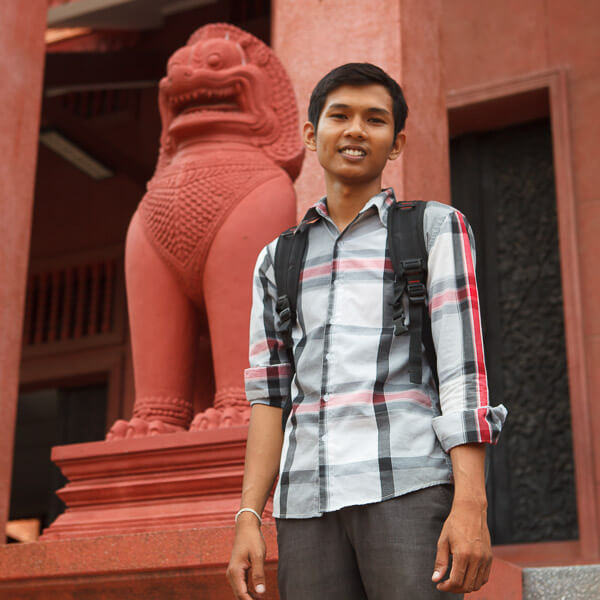 I was born in 1993 in Kampot province. Growing up I didn’t know the kids in my village that well. When I left class, I’d go straight home and never really played outside. Sometimes my mom told me not to go around visiting neighbors because they weren’t close to my family and she thought I would lose time studying or doing homework. So even if I wasn’t doing anything I’d be at home. But sometimes, when my parents weren’t home and I wanted to play, I’d run out and meet friends.

We didn’t have a preschool in my village so I studied three kilometers away at a school in another village. To get there, either I would walk or my mom would take me. I did this until the fourth grade when I could ride a bike to school. This continued until seventh grade. It was frustrating. Every year I advanced my studies, my village school would only begin offering the grade I had just completed.

When I reached first grade my village opened a preschool; as I entered second grade they started teaching first; and when I reached third grade they offered second. This continued all the way until sixth grade. When I reached ninth grade I finally had the courage to ask the teachers why they never started classes for my age when I was small. They told me they didn’t teach because in my year there weren’t enough students.

In Cambodia you must pass a test to advance to seventh grade. For this first test I felt so nervous that I wouldn’t pass. And even when I passed I didn’t know my grade because the teachers didn’t tell the students the scores. But when I started classes they assigned me to study in an “A” classroom. Only gifted students get to study in A classrooms. When I told my parents they were happy and bought me new shoes. With the exception of ninth grade, which was my weakest year for various reasons, from seventh to twelfth grade I placed in good classes.

Friends say I’m a hardworking person and I always help people from my heart. They said that I’m a patient person and friendly, but sometimes serious and not outgoing.

It was mathematics in high school

Sketching and drawing, especially making new architecture and design concepts. They are important skills in my subject.

Run a business with my knowledge

My most favorite memory happened when I was around 11 years old. I had a special test to finish sixth grade. It is the first time I was afraid I would not pass, but I got a good result. My parents bought new shoes from that.

It would be to make my dream come true. If I can, I want to be an architect and make a company that improves the city through urban architecture.

In my second semester of twelfth grade my eyesight became bad because I would study at night without much light. My parents didn’t allow me to study too late so they would turn off the light, usually around ten. But I’d stay up and study with an oil lamp.

After I graduated twelfth grade I came to Phnom Penh to take the test to study at the Royal University of Fine Arts. I was already interested in architecture because on my first trip to Phnom Penh in eighth grade I saw a house my uncle built and thought it was beautiful Sonroup, a major type of Khmer architecture. After passing the test and talking with my older brother, I chose architecture as my major.

In the future I want to build a resort at my home in the village, move my parents to Phnom Penh for a while so that they can experience the city life, and have a better standard of living for myself. Someday, I also want to see Phnom Penh city orderly and my country without beggars.

Written by Udom with editing assistance from Zomia’s volunteer editors. 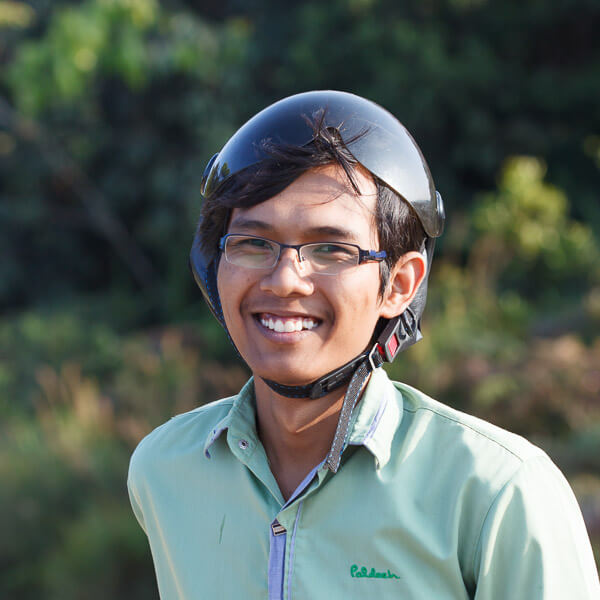 “In the future I want to build a resort at my home in the village, move my parents to Phnom Penh for a while so that they can experience the city life, and have a better standard of living for myself.”

Taking a stroll through the Royal University of Fine Arts (Phnom Penh, Cambodia)