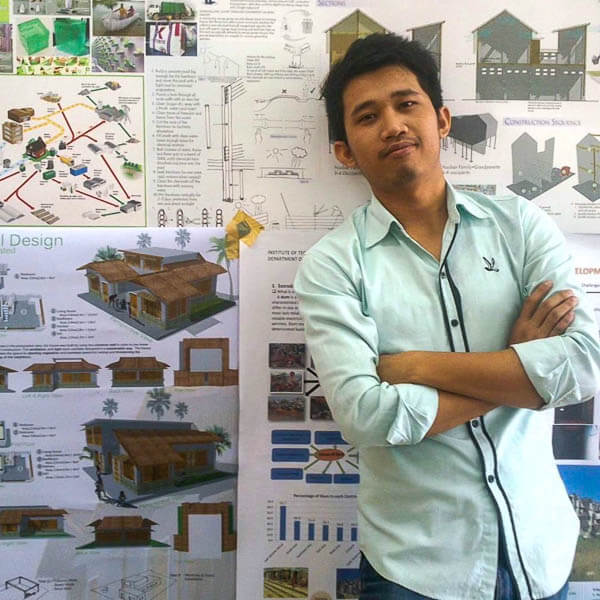 Born in 1990, I am the youngest of six siblings. I am originally from Banteay Meanchey Province, located in northern Cambodia. My father became disabled after being seriously injured in the Cambodian Civil War. My mother is a housewife. The primary sources of my family income are farming and raising livestock.

As a child, I got up early every morning, took my cows to the field, and walked about 5 kilometers to school. When studying at night, I had to make do with candlelight due to a lack of electricity. I later decided to stay at a Buddhist monastery, where there was enough light to study at night. The presiding monk patiently helped me with my schoolwork and encouraged me to study hard.

There was no high school in my village, so after finishing secondary school, I considered moving to the Central Province, which was approximately 200 kilometers away from my hometown. However, my parents were not in a position to support my education any longer.

At that time, one of my elder brothers was studying in the city with financial support from Enfants du Mekong. In addition, he had a part time job to support himself. So in 2010, I moved to the city to stay with my brother and continue my high school education. My parents and brother did their best to support me until I reached my first year at the Institute of Technology. During my time there, I went to great lengths to do well in school and not disappoint my family.

In 2012, I began to work to support myself financially. At that time, I was in the middle of doing my bachelor’s degree, so I had a challenging time juggling work and study. I endured countless sleepless nights due to stress. However, against all odds, I was able to overcome the obstacles and complete my program successfully.

What Others Are Saying About Van

Van is a very motivated student. I believe that he will be a leader in Cambodia’s construction industry after he finishes his master’s program at our institute.

My ultimate goal is to earn a master’s degree and eventually establish my own company. In order to accomplish my goal, I worked very hard and saved as much money as I could for three-and-a-half years. In 2012, I started an internet and overseas calling business and earned approximately 500 dollars per month. Additionally, I worked part-time at People in Need (PIN). I offered design programs including AutoCAD, 3D-Max, and Sketch Up. Furthermore, I worked on drafting architectural concepts, functions, and layouts. I then joined a construction company, where I did technical drawing. Later, I was promoted to Assistant Project Manager and then to Project Manager. I became Vice President of the company in 2016.

Eventually, in 2017, I decided to study in Thailand to earn a Master’s Degree in Engineering and Technology at AIT. Despite numerous challenges along the way, I have done my best to overcome them and reach my ultimate goal. While studying at AIT, I have had an amazing time meeting people from different cultural and linguistic backgrounds. I have one more year to go and will keep striving to reach my destination no matter what it takes to do so.

Written by Van with editing assistance from Zomia’s volunteer editors.

“After finishing the program, I would like to start my own company and become a successful businessman. ”

I was the first runner-up of Asian Student Exchange Program in KKU, Thailand, 2013.

I would like to see my name in the stock market and in Forbes magazine.

While studying at AIT, I have had an amazing time meeting people from different cultural and linguistic backgrounds. I have one more year to go and will keep striving to reach my destination no matter what it takes to do so.