My name is Seng. I have an elder sister and a younger half-sister. My parents divorced before I was born because my father was a drug addict. I have never seen my father.

My sisters and I were raised by our grandparents, who both worked very hard so we could go to school. We went to both Myanmar government school and Chinese school. Although I was not a top student, I was really good at sports and dancing. I participated and danced at special school events.

When I was in eighth grade, my grandparents could not afford to pay for my tuition fees. As a result, I went to live at my best friend’s house and worked part-time for her mother. I earned 500 kyats (less than US $1) per day, and my friend’s mother treated me like her own daughter. By working part-time, I was able to save money and support myself until I finished high school.

In 2011, I went to work in China because it was very difficult to find a job with a decent salary in Myanmar. I worked in a restaurant and earned 800 yuan (more than US $100) per month. Sometimes, I sang at festivals and earned 50 yuan per night. I hoped to continue my university education, but I had to send 500 yuan to my grandparents every month. Although I wanted to, I was unable to save anything for my education.

In 2012, I learned about Kaw Dai Organization, where skills such as organic farming, animal husbandry, making handicrafts, and English language skills are taught. I decided to join them and learn these skills. We visited many villages and did research on village life.

After that, I volunteered as a teacher at Shan National School in Kali Township, Shan State. I taught math to students in grades 1 and 2. In another class, I taught Shan literature, traditional dancing, and singing. In the evening, I supervised others doing organic farming, animal husbandry, and cooking. At the same time, I tried to earn a university degree through distance learning. However, I was not satisfied with my situation.

What Others Are Saying About Seng

Seng is bright, energetic, compassionate and genuinely well-rounded. She will gain valuable knowledge and experience from a university education, which will be helpful for her personal improvement and benefit any organization she works for in the future.

In 2014 , I decided to go to Yangon in order to develop new skills and improve myself. I became a member of the Shan Nationalities League for Democracy (SNLD) political party and volunteered as a personal assistant for the General Secretary of SNLD. At SNLD, I prepared lists of goods for shipment to other cities. I also managed monthly office expenditure and traveling costs. Sometimes, I organized meetings and workshops as well.

During my time in Yangon, I attended various trainings such as a leadership training program organized by Shan Youth Yangon, election preparation campaigning, and establishing a youth party, sponsored by the Danish Youth Council. I learned computer skills and received a scholarship from EduLink Australia to study English. I had a part-time job as a private tutor and also made handicrafts and translated books to earn extra money.

I am interested in politics, campaigning, leadership, and communicating with people from other ethnic and cultural backgrounds. Currently, I am doing a bachelor’s degree in Communication Arts at Rangsit University. In addition to my school projects and assignments, I have participated in many different extracurricular activities to make the most of my university experience. I hope to use my knowledge to train and empower future generations in Myanmar and reduce the unemployment rate among young people in my country.

Written by Seng with editing assistance from Zomia’s volunteer editors.

“I hope to use my knowledge to train and empower future generations in Myanmar and reduce the unemployment rate among young people in my country.”

Coming to Thailand for the first time

I like the way Thai people sell their local products and food. I am from a village and am always thinking about how I can help develop markets for the local people. 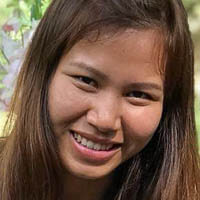